He is risen, indeed … 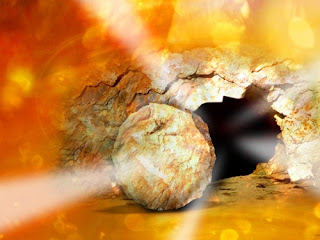 What a joy it is to be with you today and what a privilege it is to be among the company of so many good people of faith celebrating the greatest of all mysteries, the Paschal Mystery, Jesus’ triumph over death itself; the Day of Resurrection!
In the many years that I had the privilege of presiding worship in a faith community such as what is gathered here today, Easter Sundays often prove to be difficult. And I don’t mean because church attendance would all of a sudden increase quite considerably and so there’s that possible challenge of winning back more souls to the fold, although I know that there’s a petty chance of them coming back to church.
While that may be a part of the Easter Sunday scenario, the more challenging on those Easter Sunday worship services, including the one we’re celebrating now, had always been how to present the message of Easter to such a diverse group; diverse in the sense of being a conglomeration of people having different levels of understanding about the reality of the Paschal Mystery.
And what, you might ask, is difficult with that setting?
Well, within that diverse group, there’ll be those who would look at Easter from a purely cerebral point of view and would be preoccupied with some strenuous analytical exercises such as how can a man, having been dead for three days, come back to life. So while the Gospel is being proclaimed, some of them would begin asking questions, probing deeper on the theological implications but in the act, would miss out on what is being proclaimed.
There are also those who would look at Easter with some antiquated religious sentimentality and might begin to act with some element of smugness when they find among those present others who don’t fit in their self contrived picture of who should be at attendance.
There will also be those who are there only because it is the hype thing to do. A college girl coming home might say: “Hey. It’s Easter. It’s time to go to church! Which one? Let’s try the one we went to when we were back in Sunday School. They might still be hiding Easter Eggs. Oh, how I miss those years!”
Aware of this broad spectrum of interests from among those in attendance, what I find really challenging is how to create for them a renewed interest on this joyful celebration we call “Easter” and perhaps, generate enough interest so they can begin to reconsider taking a second look on their own faith journey that might have somehow faltered.

So having acknowledged these different aspects about how Easter could be viewed, let me offer one which I hope will turn out to be of some interest for such a diverse faith community that you are today.

In its very simple, elementary sense, Easter is about the rising from the dead of a man named Jesus of Nazareth. It means that his corpse which had ceased from actively functioning had been infused with all things necessary for its vital organs to  function as they used to and be considered as living once again; breathing and pulsating and getting real hungry for some real food,


It also means that this rising from the dead was a real and authentic fact of history, as avowed by those who were witnesses to it. It also means that Easter has nothing to do with bunnies and plastic eggs filled with chocolates, waiting to be found by young children who are often coached by their parents.
But then, Easter could also be seen from another perspective; one that endorses the shift from death to life as parallel to the shift from darkness to light, from loss to gain and from defeat to victory. Easter is about the rising from the dead; with death not just as the absence of life but also as a condition of darkness and hopelessness and as representative of a shattered dream or a vanishing grip from life and vitality or even from reality.
I often use as an illustration of Easter’s meaning that which lies behind the redeemed life of “someone” who has wandered into a different path in life while escaping the hard facts that “weigh” him down but has been rehabilitated and transformed to an even healthier state of being, mainly because he has not been abandoned by those who really care for him. That “someone” who has been in such a redeemed path has now realized that however horrible he had become to those who loved him, their love, however, did not falter in any way. His worst has not destroyed their love for him.
My friends in Christ, this is what Easter might look like for believers like us. Easter is about God's undefeated love for all His Creation. Because of the rising to life we call Easter, we now have been made aware that our worst cannot destroy the love of God revealed in His only begotten Son Jesus Christ.
This unmoved love for an imperfect world is what we constantly put to the test through our rebellion and our distancing from God and from the rest of God’s creation. Good Friday represents that rebellion against that gift of love. But while such utter disobedience might look so discouraging, the love of God for an undeserving world remains unperturbed.
There’s this phrase I love to cite in this regard. “For every Good Friday, there is always an Easter.” Good Friday was viewed by those who witnessed the crucifixion as the worst that could happen to their vision of being with Jesus when God’s Kingdom on earth is ushered in. It also signified the shattered dreams of the disciples and of those who decided to become followers of Jesus.
Good Friday, however, was not the end and it had no power to make even a dent on God’s unconditional love for His people. Yes, Good Friday may have represented the worst that humanity can do but Easter, on the other hand, points out the truth that even that worst thing can not destroy God's offering of love.
The Easter Story will not be complete without the account of the finding of an empty tomb. John’s gospel alludes to this when he describes what Mary Magdalene saw on the morning of the third day. The Resurrected Christ was not in the tomb any longer.
Easter means that whatever that tomb meant to keep, it failed in that regard. It didn’t do a good job. Easter means that whatever was held in captivity in that tomb has now been freed from its clutches.  Easter, indeed, is the passing from loss to gain and from defeat to victory.
Easter’s message then is that of hope; of rising above and beyond the grip of the talons of death. We find this message of hope able to propel us to a greater height; to life, if you may, and infuse on whatever we regard as dead in our being the breath of life that will transform us as a renewed creation.
In a short while we will baptize Aidan and thereafter, he will be counted among those who have passed from the virtual death of sin into the virtual life of the redeemed.  How appropriate that as we celebrate Easter being a shift from death to life, we administer to Aidan the Sacrament of Holy Baptism, propelling him into a new and different life. We have, by virtue of our baptism, joined with all of the baptized in their mission of spreading forth the message of hope; the same message which brings about reconciliation and unity.
May this Easter then become for all of you gathered here, an inspiration to revisit your respective faith journeys and for some, perhaps, move on from wherever you got stalled. And if, by chance, you need someone to be with you as you walk your faith journey, remember those who have not given up their love for you. They can become an engaged partner in your quest to freshen up the faith that, through the years, may have waivered and now in need of some spiritual nourishment.
Again, Happy Easter to y’all.
Alleluia. Christ is risen. He is risen, indeed. Alleluia!
Posted by Bayani D. Rico at 8:21 PM