Bread for everyone, crumbs and all ... 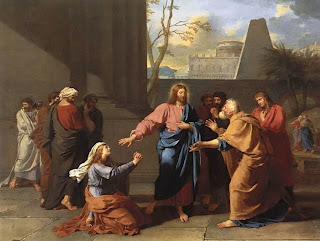 The gospel lesson for this 15th Sunday after Pentecost (Mark 7:24-37) talks about two healing miracles.

Two beautiful stories, indeed and there’s a good chance they’ll add to the ways we might picture Jesus, the Great Physician. Of the two stories, the second is more dramatic.

The first, while not as dramatic, appears to be interesting since it often elicits from Christians some negative facial reactions; perhaps a raised eyebrow, the one you’d do when something you hear does not compute.

This kind of negative body language is prompted by some kind of a clash between how we had been traditionally picturing Jesus as commonly depicted in Holy Scriptures and with how we might picture him today as described by Mark.

You see, chances are that your images of Jesus include one of supreme gentleness; and with those beautiful eyes, Jesus is portrayed as the kindest, most compassionate person who ever lived. But now, it’s something quite different. We just heard Jesus seemingly insults a woman. What happened to his sense of respect? I’m sure having lived and stayed for a while with Mama Mary and just like a good Jewish son, he should have learned how to respect women. But that doesn’t seem to be the case this time.

And so our minds begin to wonder why Jesus made the allusion that this woman, who basically was just being a good mother begging for her daughter’s well being, was likened to a dog. Could you believe that? A dog! It was an insult pure and simple. Correct?

Now, just before you jump to some conclusion and say that Jesus’ behavior and words are, indeed, so unbecoming, let’s revisit that event from a different perspective so we will have a clearer understanding of this seeming unbecoming attitude of Jesus.

Mark and Matthew both have records of this account. We learn from both versions that Jesus, at one time, was in the area of Gennesaret, in the northern part of Galilee, and that he crossed the border and went further into the area of Tyre and Sidon.

It is important that this little bit of detail be mentioned because this area, Tyre and Sidon, where Jesus and his disciples entered and the setting of this story, was actually an area where Jews were not the dominant culture. This means that Jesus was virtually a foreigner in the area. It was in this area where Jesus was approached by a woman, described by Matthew as a Canaanite but described by Mark as a Greek, a Syro-Phoenician by ethnicity.

This woman allegedly came to see Jesus and implored his compassion by literally falling down on Jesus’ knees and begged him to throw the demon out her daughter. She wanted Jesus to exorcise her daughter that she may be freed of demonic possession.

Knowing who Jesus is and what he’d do in such situation, we could somehow anticipate what was about to transpire. We’re hoping that Jesus, who had been preaching and healing and doing miracles, would cure the woman’s daughter; just as he had been doing elsewhere.

And do you think Jesus was moved with compassion? Matthew tells us that he did not. No answer. In fact, he was encouraged by his disciples to turn her away.  Yet this woman was so persistent, just like a good mother who cares for nothing else except the well being of her child.

Mark does not include this part in his account. He simply proceeds to report that Jesus said: “The children have to be fed first. It isn’t right to take the children’s bread and toss it to the dogs.” That may not be of a vulgar character but a very loaded statement, actually and here’s why.

We know Israel had always believed that they were the chosen people; they were God’s people. The Jews believed that and held it firmly as a truth they could proudly claim. They also believed that those who were not Jews, the Gentiles, were the “other people”; not saved, not chosen and therefore not God’s people. Jesus, like a good Jew, heard and was aware of this claim; in fact, at one time, he was heard to have been telling that he was sent only for the lost sheep of Israel.

It is then against this background that Jesus’ allusion to “children and dogs” becomes very significant. The “children” are the people of Israel and this Syro-Phoenician woman, like the others, is the “dog”.

Knowing how “loaded” this statement was (and an insult galore), the woman should just have discontinued her plea; moved on and disappeared in the crowd and that would just have been understandable.

But she did not. Instead, she gave her rebuttal. “Lord, even the dogs under the table eat the children’s crumbs.” She (like a dog) would be content to lap up the scraps that fell off children’s plates. This rebuttal was an ace, to use a tennis terminology. With that remark, Jesus gives in. He even gave a compliment. “Good answer” he said, assuring the woman that the demon has left her child; that she was healed and restored back to the community.

So, what do we glean from this? Well, for one, I don’t think this is a story about what is acceptable in our social dealings or how to ward off insults from others. I don’t think this is about anything else other than to tell us about mission; the mission of the church and for that mission to succeed, we need to topple down some barriers.

Jesus preached about some hard stuff! He preached that salvation is for all and by “all” he means “all”. The story about the Syro-Phoenician woman becomes a powerful tool that we could use in teaching and advocating for this radical claim on inclusion. Both “children” and “dogs” partake of the same bread!

There is another element in the story that points to this mission of inclusion. We often think of ourselves in the shoes of the “disciples”, after all, they are our forefathers in the faith. That, however, might not be a proper claim to make. Again, using the former reference to the Jewish claim of their being the Chosen People, it would be more correct to regard ourselves as the “others” and in this story, likened as the dogs. The twelve disciples would also have seen us as “dogs”. They would have refused us entrance into their place of worship unless we jump through a lot of hoops designed to make joining more difficult.

Judaism in Jesus’ time had become a kind of an exclusive club with limited membership. Jesus changed all that. He broke the barrier of exclusivity by race and religion.

Perhaps, like the disciples, we need to widen our perspectives. Perhaps, we need to realize that the gospel of salvation is meant to reach to all and by the same line of argument, “all” should mean including everyone.

And if the story of the Syro-Phoenician woman is about mission, then the mission of the church is to reach out to those who are outside of that little corner we commonly construct when we think of evangelization.

Brothers and Sisters in the Lord, part of the mission of faith communities is to be a congregation that is reflective of the community. Your own faith community should mirror the diversity that is in the community; encouraging the blending of various gifts and talents.

If your faith community already looks like your community, you should be commended for an excellent job of inclusion. For those who are not there yet but on the way, may today’s gospel lesson serve as a good source of inspiration. The saving and healing grace of God, thru His Son Jesus Christ and by the power of the Holy Spirit, will show us the way to face our future and will empower us to change the faces of your congregation into what God intends us all to be.
Posted by Bayani D. Rico at 4:00 PM